Founded in 1957, Crewe Male Voice Choir  began with 18 members, many from the former Rolls Royce  Merlin Singers - their first concert was in October 1958.Over the years, the Choir achieved considerable success in a number of competitions held at Blackpool, Morecombe, Llandudno and Chester. Our highlights of the last 60 years  includes:

Crewe Male Voice Choir has performed at many venues throughout Cheshire, Lancashire, Yorkshire, Staffordshire and Wales as well as further away from home with tours in France, Holland, Belgium,  Germany and Poland.  During their tour of Germany the Choir established a firm  friendship with the "Germania Chor" from Bischofsheim, one of the towns twinned with Crewe; the choirs took part in several exchange visits and joint  concerts.

In 2006, the choir travelled to Gibraltar as guests of the Band of the  Royal Gibraltar Regiment presenting concerts in the King's Chapel, local schools, restaurants and in the main square. In 2008 we visited Dzierzoniow, a delightful and picturesque little town in Lower Silesia, Poland. The Choir gave a concert in Wroclaw Cathedral and at the church in Dzierzoniow.

Crewe Male Voice Choir continues to make a significant contribution to the life of the town. The Choir has supported civic events such as the First World War commemoration service, Remembrance Sunday, the Mayor’s Christmas Carol Service, Creative Crewe’s “Big Events” and the Crewe Chronicle Community day. The Choir was nominated by the Crewe Chronicle for their “Pride of Crewe” award August 2015 and again in 2016. In 2017 the first ‘Come & Sing Day’ had a Gilbert &  Sullivan theme. 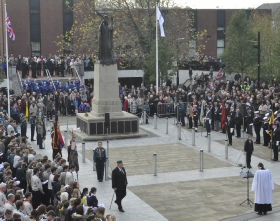 The choir is very grateful for the generous and continuous sponsorship from Mornflake Oats.