We are very privileged to have such a fantastic rehearsal space at the Cheshire Academy on Broad Street (Crewe) and are always looking for ways we can support the centre in their new ventures. This summer we were very excited to have been asked to take part in the recording of a charity single written by one of the founders of the Academy after we had initially premiered the piece in 2015.  A short 3 years later and this song has been transformed to include a massed choir of 60+ people from community groups across Crewe and Cheshire and soloists Gail Stubbs and Little Wall. 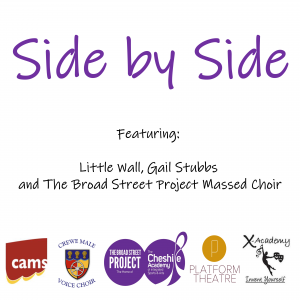 The single is now available on iTunes, Amazon, Google Store, YouTube Music, Spotify, Deezer and many more. All proceeds will go to the Cheshire Academy to support them to continue providing excellent services for their students and the local community. We had a great time recording it and hope you have a great time listening to it!

We have had a fabulous couple of months celebrating our 60th Anniversary with our friends, supporters and formers. A formal reception was help on the 24th September in the Municipal Buildings of Crewe, the same spot where in February 1958 a meeting was held to inaugurate a ‘new male voice choir for Crewe and District’! In attendance were Mayor of Cheshire East, Cllr Lesley Smetham and consort Mr David Smetham, the Mayor of Crewe, Cllr Brian Roberts, the Mayor of Nantwich, Cllr David Marren and consort Mrs Belinda Marren and the Mayor of Sandbach Cllr Richard Hovey. The Choir then entertained their guests to an Evening of Music with songs from the earlier and current repertoires. Denise Leigh (soprano) and Stefan Andrusyschyn (accordion), who have performed with the Choir over many years, added their own delightful and unique blend of vocal and instrumental music. Denise joined the Choir for the final song, “You’ll Never Walk Alone”, sending a tingle down the spines of the audience.

over the course of my career as a local Government Officer, I’ve been in the Council Chamber, in the Municipal Buildings, many many times but tonight was by far the most enjoyable. The Choir sang a wonderful repertoire that had my leg tapping and I so much had this urge to join in. Denise Leigh has one of the finest voices I’ve ever heard and was very amusing and Stefan certainly showed his ability with the accordion; they were quite a double act. As a Liverpool fan, from boyhood, the final song was irresistible and I knew all of the words, and everyone joined in with that. It was a great atmosphere and I had a very enjoyable evening and I know the other Mayor’s also enjoyed the event. I hope the Choir has another 60 years…

On the 15th October our celebrations came to a conclusion with the choir returning to the Lyceum Theatre for a Gala Concert with special guests Crewe Brass Band, Jane Johnson, Kevin Whitfield, Nadia James and the South Cheshire George Formby Ukulele Society. 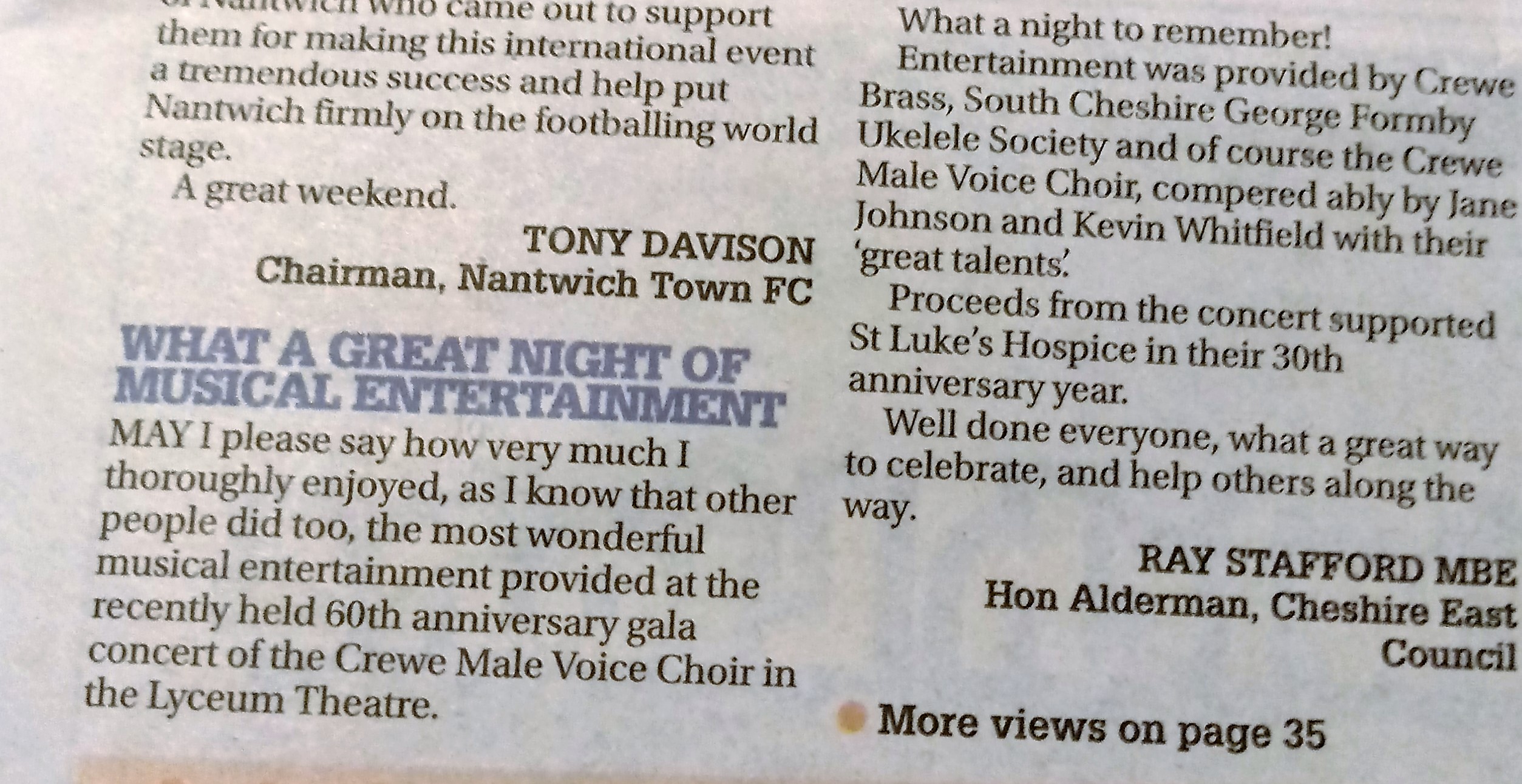 There are no upcoming events at this time.

This message is only visible to admins.

Error: Error validating access token: The session has been invalidated because the user changed their password or Facebook has changed the session for security reasons.
Type: OAuthException

Had a lovely lunch at Hopes and Beams today. A lovely end to a great term. ...

Share on FacebookShare on TwitterShare on Linked InShare by Email

Share on FacebookShare on TwitterShare on Linked InShare by Email